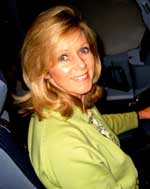 Lori is a senior captain, check airman and FAA designee with US Airways who in 1987, flying for Piedmont Airlines, became the youngest female airline jet captain in the world. Her diverse aviation experience includes ratings in helicopters, seaplanes and gliders as well as serving as her airline’s Director of Flight Safety and Quality Assurance. Highly proactive in the aviation industry, Captain Cline is a past executive council member of the International Society of Woman Airline Pilots. She designed three permanent exhibits highlighting women airline pilots for aviation museums around the country and has also co-authored two books on women’s aviation history entitled: Ladybirds, The Story of American Woman in Aviation. Most recently she represented her airline as a member of the NTSB’s Operation’s Team in their investigation of US Airways flight 1549 that landed in the Hudson.